Swiss soprano Rachel Harnisch studied with Beata Heuer-Christen in Freiburg im Breisgau. She gives guest performances at the leading opera houses in the world. At the beginning of her career she sang especially Mozart, but today it is predominantly works of the classical modern and contemporary.
In the recent past, she has received many great role debuts as Rachel in Halévy's La Juive, as Emilia Marty in Janácek's Vec Makropolus, and in the autumn of 2017 in a demanding playwright role in Aribert Reimann's world premiere .L 'Invisible' at the Deutsche Oper Berlin. She worked closely with Claudio Abbado.
The soprano sings a wide concert repertoire from the passions of Johann Sebastian Bach to compositions of our time.
Lieder recitals are particularly close to her heart, her constant partner here is the pianist Jan Philip Schulze, with whom she has recorded a much acclaimed version of Hindemith's Marienleben. Numerous recordings document Rachel Harnisch's career.

For an updated biography, please contact the agency of Rachel Harnisch: 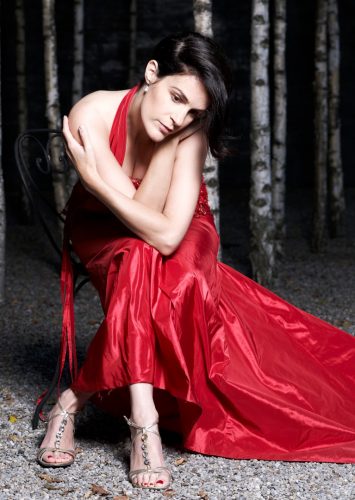 After the extremely successful premiere of Aribert Reimann's opera L'invisible at the Deutsche Oper Berlin 2017, in which she sang three roles, the Deutsche Oper immediately offered her the title role in Jenufa. Recently, she has performed at the Janacek Festival in Brno with the Antwerp Opera as acclaimed Emilia Marty in The Makropulos Case. She remains connected to Antwerp and will sing there in the spring of 2019 the world premiere of Hector Parras The Well-Wise, directed by Calixto Bieito.

At the Grand Theater de Genève a new production 'The Makropulos Case' is planned for the season 1920/21.

2019 begins in Rome with Mahler's Symphony No. 4 under Yuri Temirkanov. At the Berlin Philharmonic she will premiere the song cycle Fragments de Rilke written by Aribert Reimann under Robin Ticciati.

Since her recitals are particularly close to the heart, there are also some exciting projects to be expected. With her pianist Jan Philip Schulze, Rachel Harnisch will sing Hindemith's Das Marienleben at the Bruckner-Haus Linz and in the Tonhalle Maag in Zurich the audience will be able to look forward to a multifaceted recital featuring works by Mahler, Schubert, Strauss and Crumb.

In 2016, Rachel Harnisch performed two highly successful roles: Rachel in Halévy's La Juive in a production by Olivier Py under the musical direction of Daniele Rustioni in Lyon and as Emilia Marty in a new production of Janaceck's Vec Makropulos under Tomas Netopil at the Vlaamse Opera in Antwerp and Gent. As Rachel, she was heard again at the Opéra du Rhin in Strasbourg, in a production by Peter Konwitschny.

Over the past few years she has given guest performances in the leading houses of the world. As Contessa in Mozart's Le nozze di Figaro, Fiordiligi in Cosi fan tutte, Pamina in The Magic Flute, Konstanze in The Abduction from the Seraglio, Michaela in Bizet's Carmen, Antonia in Les Contes d'Hoffmann, Blanche in Poulenc's Les Dialoges des Carmélites, Mélisande in Pélléas et Mélisande, Ann Trulove in The Rake's Progress, as Clémence in Kaija Saariaho's L'amour de loin, or as Hélène d'Egmont in Donizetti's Le Duc d'Albe she was at the Opernhaus Zürich, at the La Scala, at the Grand Théatre Genève, at the Vienna State Opera and Munich, at the Deutsche Oper Berlin, at the Bastille in Paris, and at the opera houses of Ferrara, Modena, Reggio Emilia, Verona, Naples, Palermo, Turin, Athens, Antwerp, Ghent, Toulouse, Lyon , Essen, Dusseldorf, Brussels and Madrid. She is also a regular guest at the festivals in Lucerne, Gstaad, Edinburgh, Evian and at the BBC Proms.

In the recent past she sang in the Musikverein Wien under the direction of Ingo Metzmacher Schuberts Lazarus, as well as under his direction in Turin Berg's Lulu Suite and Arnold Schoenberg's op 22, conducted by Zubin Methas Beethoven's Missa solemnis, Verdi's Requiem at Casino Bern, a New Year's Eve / New Year's Concert with the Zurich Chamber Orchestra, Daniel Hope and Albrecht Mayer, and Mahler's Knaben Wunderhorn Lieder in Finland.

There are several CD's recordings. Among them is the live recording of the memorial concert on the anniversary of Karajan's death in Salzburg under Claudio Abbado with arias by Mozart. Also under his direction appeared a comprehensive CD box with works by G.B. Pergolesi, including the Stabat Mater and Beethoven's Fidelio from the Lucerne Festival 2010. Under the direction of Mario Venzago, she played Schoeck's visit to Urach and most recently The Fisherman and syni Fru. Most recently, the highly acclaimed recording of Hindemith's Das Marienleben appeared.